Pioneering players and the birth of the electric guitar. 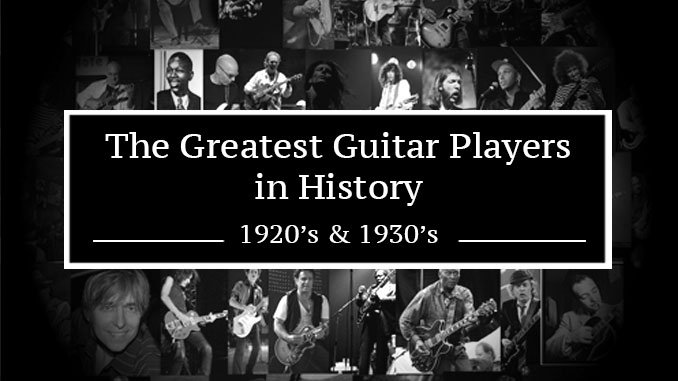 In this series of posts, I’ll be diving into the past to reveal some most pioneering and innovative electric guitarists over the past 100 years.

Doing this can give you a fresh perspective on what is possible with the instrument. It will help you progress and play with greater creativity.

The history of the electric guitar is fascinating. Many guitarists have contributed to the instruments success throughout the years, so where do you start?

This series of posts isn’t meant as a definitive list – just a few of the greatest pioneers to whet your appetite.  As you will discover, life changing social and political changes at the time had a big impact on these guitarists.

These changes, for good or bad, inevitably inspired their playing.

Although having their own sound, many guitarists of today have spoken of “borrowing” musical phrases and riffs from the generations of players before them and incorporating them into their playing.

"Every guitarist in history has taken inspiration from earlier generations, and its part of how we grow as musicians..."

The greatest players throughout history could communicate their musical ideas to stunning effect. Regardless of genre, these pioneering players shared the ability to use the guitar as a channel for self expression.

Focusing on two decades at a time, I’ll highlight the key players for you to explore in bold text. For this post, we go back to the beginning for the electric guitar, the 1920s and 1930s.

Trapped in the Big Bands

The 1920’s saw the evolution of the Big Band, these large ensembles of 10 to 25 members dominated popular music at the time. They played jazz during the 20’s and evolved the swing music style from the early 1930’s onwards. As part of the rhythm section, the guitarist played nothing more than a supportive role.

The horn’s took the credit for solo’s, partly enabled by their volume and tone which could cut through the busy mix.

Up to this point guitars were acoustic, their contribution blended with the other instruments and the listener would hear the sound as a whole band.

The guitarists felt increasingly trapped and were striving to gain some of the attention for themselves.

Around the same time period, RCA – an American electronics company, released the first Valve based amplifier. This proved to be hugely significant and excited many guitar players including the self taught guitarist and inventor Les Paul and jazz guitar virtuoso Salvatore Massaro (aka Eddie Lang).

They began to experiment with ways to amplify their instruments by adapting pickups from phonograph needles and telephone receivers.

Using amplified guitars would not just compete with the Sax’s and Trombones but completely blow them out of the water – there was no doubt, electrifying the guitar changed the way popular music was made forever.

"Essentially the electric guitar could replace the horn section and enabled a small trio or quartet of musicians to achieve what a whole Big Band could..."

Eddie Lang was one of the 1920’s most recorded guitarists and was a huge influence on the first generation of players. He was an impressive musician who could accompany blues bands, play classically and hold his own with any of the great musicians of the time.

His style was unique and showed a sophisticated approach to chord voicing and solo playing. With his playing and help from an amplified sound, he forced the banjo players – popular at the time, to switch to electric guitar.

You can hear his style on Bix Biederbecke’s “Singing the Blues”. He also wrote a series of guitar duets in 1929 with blues player Lonnie Johnson under the pseudonym Blind Wille Dunn.

He and Johnson would often play together under the name “Blind Willie Dunn and his Gin Bottle Four”.

The group were one of the first to include black and white musicians playing together.  The reason for using the pseudonym has been argued that either it was taken from a friend of his – but more commonly is thought that is was to try and gain some commercial success on the heels of popular African American blues players such as Blind Lemon Jefferson and Blind Willie Johnson.

"Although influenced heavily by acoustic guitarist Django Reinhardt, Les Paul's contribution to the electric guitar of today was vast..."

He was a significant inspiration to other jazz guitar players at the time which he eventually developed to include fast runs, dynamic trills, country and western licks and interesting rhythmic techniques.

He was also a key influence in inventing the solid body electric guitar which made the whole rock ‘n’ roll genre possible.  The Gibson Les Paul guitar was inspired by a prototype guitar nicknamed “The Log” which he made from a 4″ x 4″ piece of pine in 1940.

Back in 1903, a trained composer named William Christopher Handy waited for a delayed train at Tutwiler station, Mississippi one day. Whilst drifting in and out of sleep a local poor African American man played a guitar fretted with a penknife while singing of the local railroad line in a sad and mellow tone.

This sound of the knife on the strings and the haunting vocals was completely unique – traditional African music was mixing with anglo/American Folk to produce an early blues style which later became known as “Delta Blues”.

The Delta blues sound was distinguished by an emphasis on rhythm and the use of bottleneck slide.

"Delta blues falls under the larger umbrella of country blues or rural blues which generally refers to a simple form with just a guitar for accompaniment..."

W.C Handy was fascinated with this music as it was unlike anything he’d ever heard before and he set out to learn all the intricacies of its form and style. In 1909 he published his first ever song “Mr Crump” inspired perhaps from his encounter back at the train platform.

"WC Handy gave delta blues a contemporary form and went on to declare himself as "the father of the blues" by bringing the genre to a wider audience..."

Using his composing skills, he is noted for giving Delta blues a contemporary form and went on to declare himself as “the father of the blues” by bringing the genre to a wider audience.

The roots of blues music were inspired from traditional African songs brought to America during the slave period. This “work” music was sung by slaves and a call and response element was used – phrases from a lead singer would be followed by others and often the songs would be sung in rhythm to the task at hand.

Learn more about the roots of blues music 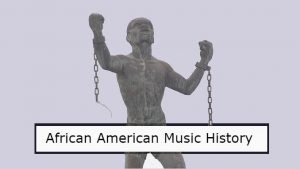 The roots of blues music were inspired from traditional African songs brought to America during the slave period. This "work" music was sung by slaves and a call and response element was used - phrases from a lead singer would be followed by others and often the songs would be sung in rhythm to the task at hand.

The call and response aspect was incorporated into rhythm and blues and rock ‘n’ roll in the decades that followed.

The first Delta blues player to gain popularity was Charley Patton. Venues would be packed out when he played, his loud and gravelly voice would mesmerise the audience along with his exciting showmanship style, playing on his knees and behind his head or back.

He was one of the first to put the blues in a strong syncopated rhythm and his slide playing would finish off vocal phrases in his songs. He was a huge influence on other musicians of the Delta area including Howlin’ Wolf and the young Robert Johnson.

Due to economic instability and rising racial segregation, African Americans of the southern states were forced out in their millions. Known as “The Great Migration”  the larger cities further north, including Detroit, Chicago and Memphis became home to many African Americans.

Within these larger cities, new styles of electric blues emerged as players were inspired by their new surroundings. They had new hopes of a better standard of living as northern companies were giving incentives to black people including jobs and low cost housing.

Throughout the 1920’s blues and jazz musicians experimented with knives and bottlenecks to fret their acoustic guitars and this smooth and fluid feel was taken up by the electric guitarists.

"Using a slide on guitar could mimic the expressive nature of the Saxophone. Players including Blind Willie Johnson became impressively proficient with the technique..."

By the time Radio was invented in mid 20’s, popular music in America was developing at a fast pace. In the south a mix of influences from Europe created Hillbilly music and artists Jimmy Rodgers and The Carter Family found success through the airwaves.

The Guitarist in the Spotlight

Les Paul and other DIY musicians had experimented with trying to amplify the sound of their guitars, however during its early days, in 1932 the Rickenbacker guitar company produced their first electric guitars (albeit in Lap steel form).

This new instrument – nicknamed “the frying pan” after its unusual shape, featured the first magnetic pickup, invented by George Beauchamp and brought them success when prominent musicians of the day agreed to endorse them.

In 1935, the Jazz guitarist Eddie Durham played a solo on The Jimmie Lunceford Big Band’s track “Hitting the Bottle”. This has since been recognised as the first amplified guitar to appear on record.

There were many other notable pioneers around this time achieving success, including Floyd Smith, who played an amplified Hawaiian guitar on Andy Kirks ”Floyds Blues” and Eldon Shamblin who played with in a western swing band called Bob Wills and His Texas Playboys.

In 1937, Shamblin became the first known country musician to use a solid body electric guitar – the Rickenbacker Electro Spanish model B.

The Gibson guitar company were also making history with advances in electric guitar design with their first ES (Electro-Spanish) models.

It was during this time he established the electric guitar as a solo instrument in its own right. With his ES-150 he would delight the crowds with his musical responses to Goodman’s playing.

From 1939 to 1941 just before his death, Christian produced some of his best-known recordings, including “Solo Flight” where he builds momentum with sweet sounding phrases and creative playing.

"Charlie Christian established the electric guitar as a serious single line melodic instrument matching the horns, clarinet and other solo instruments in jazz..."

Christian also demonstrated an original technique by including edgy sounding ‘dissonant’ notes and diminished 7th chords, which would later inspire the “Bop” movement.

The Rise of the Guitarist

The 1920’s and 30’s saw guitarists stepping out from the shadows of the Big Bands and finding their own voice. These two decades were a hive of activity – The invention of the valve amplifier was a huge benefit and guitarists could finally project their sound fully.

Eddie Lang’s impressive recording career from 1924 to 1933 was made possible by these advances in technology and recording techniques and demonstrated what was possible with the instrument to countless future musicians. The invention and growing popularity of radio brought these stars into thousands of homes across America and the UK.

Advances were also being made in guitar construction and manufacturers started to add their own variations of magnetic pickups to their guitars. With musicians such as Charlie Christian establishing the guitar as a serious solo instrument in its own right, the transition from acoustic to electric guitar domination was well underway.

Read the next article in the series right here!

we continue the journey with blues guitar kings and the birth of rock ‘n’ roll.